Making the move to Puerto Vallarta

So, two weeks of timeshare just wasn't enough, and even the two months in a rental left you lusting for more. Puerto Vallarta can get to you that way, and then the only thing to do is move here –trade the house up north for one with a view of the sea framed by scarlet bougainvillea! But before you embark on your idyllic new life by the bay, there are some details to consider.

Keep in mind that once you leave your home for another country, you become an alien in the new locale and must comply with its immigration laws.

Mexico's immigration regulations and procedures can be a bit tricky, and, somewhat like traffic signals here, often appear to be mere guidelines rather than strict laws. The potential for bureaucratic bewilderment may seem overwhelming, but the key commandments of "patience", "photocopies" and always bringing a book along to read during the wait can help ease the process. These commandments also will come in handy when dealing with those other bastions of bureaucracy, the telephone and electric companies, not to mention banks and even video stores.

As with any move, an important consideration is what to pack. In this case, your decisions should depend not only on the laws regulating what you're permitted to bring into Mexico –with a recently issued residency visa, you supposedly have a once-in-a-lifetime chance to bring whatever the consulate closest to your last non-Mexican residence, in its infinite wisdom and sole discretion, permits –but also on what you can expect to find once you arrive. Thus, you'll want to chuck your sweaters and instead wrap your computer keyboard in a nice bathroom rug or a couple of luxurious bath towels –because "fluffy" is not a well-understood concept in Mexico.

You'll also want to toss the pantyhose –they'll disintegrate before you have a chance to wear them –and men, forget those ties and suits. Actually, you should forget any garment with a lining, as there is an exceedingly high "stick-to-the-skin" factor here, particularly during the six summer months from May through October. And while you've probably figured out you won't need the fur-lined boots, you might not guess that your high-heeled sandals can become a serious handicap on cobblestone streets. Also, skip anything suede because you won't need it and the substance has an unfortunate propensity to grow mold.

While gauzy summer clothes are for sale in scores of stores here, finding plastic wrap that sticks to anything other than itself is impossible. Conversely, Mexican "band-aids", even the "brand name" ones, refuse to stick to anything –including your skin. And I was startled when my dentist here recommended that I buy dental floss on my next border crossing. Generally, manufactured items here tend to be expensive, difficult to find, or they simply "perform differently". Thus, get wonderful coffee in any market, but bring the filters in your suitcase; buy some terrific Mexican shampoos, but pack your electric hair curlers.

The list of essentials from north of the border will grow shorter, however, the longer you're here. I've found superb local products I would miss terribly –especially in the food department, always my downfall. I've renounced cosmetics –unless I know I'll be socializing in air conditioning– and I no longer weigh down my suitcases with reading material since I discovered the myriad book exchanges here.

Still, tucking a couple of jars of mincemeat for Christmas dinner into your carry-on or wrapping an electric ice cream maker in your new bedspread doesn't seem like a big deal, except that the fine print on the customs form clearly indicates that you should not be in the "Nothing to Declare" line with these treasures, whether arriving by air or land. But most people blithely ignore the fine print.

I recently returned from a five-day trip to L.A. with three bulging suitcases containing a "few" non-tourist items –like four-dozen decorative cocktail napkins and several three-way bulbs, a product unobtainable in all of Mexico. The usual procedure at any Mexican aduana is to hand the customs officer the completed card and press the button on the "traffic light". Green means go right on through, while red means you get to open your luggage, dirty underwear and all, for inspection. In this case, the customs official clearly suspected I had more than the $300 USD of "miscellaneous" items beyond the personal clothes allowed an air traveler and strongly suggested I make a declaration and pay up before hitting the button. But the great thing about ex-pats in PV is their spirit of adventure, so after 10 minutes of verbal sparring, I politely but firmly declined her offer and gambled on the integrity of the random signal system, which apparently is truly indiscriminate because I got a green light!

So, now you're residing in "paradise" with a great view of the bay and, somehow, the days are flying by. Your friends and family are still asking, "But what do you do all day?" And it's hard to explain that what you thought would be endless lazy afternoons in a hammock with a good book and long siestas simply have not materialized. There are just too many things to do in Puerto Vallarta!

By day, there are the usual chores of living –each with its own possibility for devouring time. Take bill paying, for example, a rather mundane job in most places. The Mexican postal system can be a bit vague at times, but the consumer is required to pay the bill on time, whether or not it ever arrives. I discovered this fact the first time my telephone was turned off for non-payment, promptly on the day after the money was due.

I was mortified, not to say aggravated, to have become delinquent my second month of living in paradise, so off I went to my local Telmex office armed with copies of my bills and righteous indignation. But my representante was so gracious about the whole thing I couldn't stay angry. After apologizing for the efficiency of the telephone computer system and the inefficiency of the mail, she suggested that I stop by between the first and fifth of each month if I hadn't received the statement; and now I go to visit each month and catch up on gossip, even though I could pay the bill as easily at the bank. Some utility bills can be paid at the supermarket as well, but forget the mail.

Of course, in addition to the mundane errands of life, there will be book clubs, bridge groups, golf games, yoga classes, tennis, boating activities, sewing and writing clubs and a surfeit of really worthwhile charitable organizations clamoring for your time and energy. And set aside time for the Internet and email –a lifeline to the world around the bay as well as outside it!

Save the evenings for the myriad social and cultural activities: parties, book signings, dinner theater, art shows, jazz and dance concerts and music recitals under the stars. In fact, "Where To Retire" magazine recently listed PV as a highly recommended place to retire in Mexico because of its many artistic activities. Perhaps you'll even want to participate! All efforts are appreciated in this town, and you may find yourself onstage, as I have, in one of the wonderful local productions.

Of course, another worthwhile project might be studying Spanish, with private and group classes readily available in classrooms or your home. Certainly an understanding of Spanish enhances your life here and the Mexican people you meet will be pleased at any effort to speak their language, but it really isn’t a requirement for living in PV. The foreign community is large, and PV is a tourist town so for most shops, services and restaurants, getting along in English isn't a problem and generally gringos bright enough to get through the red tape to set up a household here can manage enough Spanish to communicate the basics when necessary, especially if combined with the correct combination of grunts, nods and gestures.

Nevertheless, learning a language teaches you about the people who speak it. For example, the word esperar means "to hope" as well as "to wait" and "to expect". So if you're home expecting a repairman or a delivery at noon, at 1 pm you'll be anxiously waiting and by 3, it's hoping –but in Spanish there's no need to change verbs. Just don't forget the English word "patience!" In fact, don't fret at all. This is Puerto Vallarta and the bay is sparkling in the sunlight somewhere right outside your door. Maybe it's the moment to hit that hammock and just swing gently until it's time to watch another magnificent sunset. If the guy shows up, fine; if not, there's always mañana. 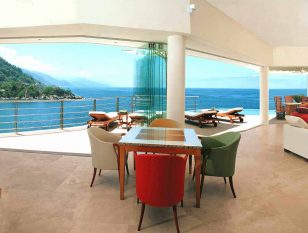 Letting Someone Else Do the Chores 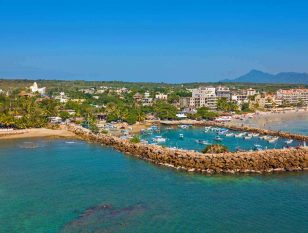 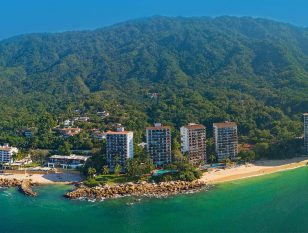